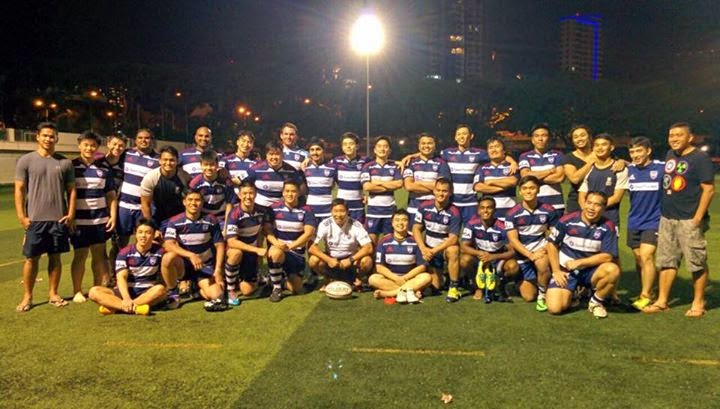 The year might be winding down, but the National league is still rolling on, with 2 more weeks left before the end of year break. It’s shaping to the business end of the season and this last weekend’s games certainly showed the intent of some sides in ensuring there is no post Christmas blues come January 10 when the league restarts.

The Singapore Cricket Club Rugby Section had a fruitful day on the Padang, with the SCC Lions kicking off proceedings against Wanderers 3rd XV in the Conference. A respectful minutes of Silence for fallen cricketer Philip Hughes was a prelude to a real firecracker of a game, which saw the return of Simon Etheridge on his recovery road after ankle surgery earlier this year. It was a hard fought game by both sides, with SCC Lions coming out 22 – 10 Winners. The SCC’s other conference team of wily vets, the Growlers dispatched the Wanderers Vets 41 -12 and with that the Conference is again looking like a two horse race between the two SCC sides for the finish. Oldham continues to impress in the conference division led by ex Singapore international Amos Seow. The mix of seasoned vets and young schoolboy talent has really come together well, and they showed their polish against Police with a 45 – 7 win.  Look out for Oldham to be the dark horses of the championship came finals time.  A very young Saints RFC team, boosted by ex age group international Ryan Choo and Singapore 7s rep Teng Chong Yau and led by Jelvin Soh will be ruing a close game against Bedok 3rd XV which ended in a draw. With the lead and only minutes to spare, some inspired substitutions which saw no less that 4 ex internationals in the likes of Mark Lee and Rong Jing Xin gave Bedok a crucial score to deny the Saints the win and sees them chasing the rest of the top table pack.  Tamoko Lions recorded a well deserved win over a Blacks side in transition.

In the Championship, the SCC Tankards continued the winning ways on the Padang with a 31 – 9 win over Wanderers 2nd XV. The Tankards are unbeaten to date, and have been able led by Singapore International Jonathan Kay from scrum-half. National Coach Casey Mee is still in vintage form and controlled play over a Wanderers side that boasted several current and past internationals.  In the only other Championship game of the weekend, Bedok Kings 2nd XV, with National Captain Gaspar Tan leading in his road to recovery from a elbow dislocation,  overcame a spirited Bucks side 21 – 10. It was a great game to watch, with some early domination from Bucks with Jnr Apati making some barnstorming runs.  Bedok steadied the ship and came back to win it. The Tankards are currently leading the table, with Oldham 1st XV and Gaulious respectively rounding off the top 3.
The Premiership saw the battle of the unbeaten sides with SCC 1st XV and Wanderers XV battling it on the Padang. It was already a successful day for the SCC and the 1st XV were looking to round that off against Wanderers. SCC had the services of National No 8 Peter Mcfeely back to spearhead a formidable pack but it was the cool calm experienced head of David Griffiths at 10 that tipped the balance for the home side. His pin point kicking and game management stabled the SCC against a Wanderers side that was fit, big and hungry to keep their unbeaten streak.  The Wanderers front row of Singapore Internationals Muhammad Hasif Azman and Alvin Ho with hooker Matthew Humphreys was impressive, and set a platform for National 7s rep Saiful to weave in and out of the SCC defence. Both sides traded key tries, but in the end it was a conversion which distanced the SCC , in a hard fought 22 – 20 win.  Wanderers head back to re group with a bye next week, and SCC look towards building their lead against Bedok Kings next week.
The other game in the Premiership was Bedok Kings vs Saints RFC. Both sides featured a wealth of local age group and international players past and present, with Saints RFC the new kids on the block and looking for their first historic win. Saints RFC were aggressive from the start, with ex international Anil Kumar looking impressive around the pitch from 2nd row pressuring the Bedok attack. Bedok’s back row of Vickneswaran Sellathurai, Simon Dumergue and Mark Kurish were brilliant in the first half with rampaging runs, and were unfortunate not to open the scoring. Saints opened the scoring through National 7s rep Nicholas Yau and defended very stoutly against a rampaging Bedok counter attack. Bedok came back to open their accounts in the 2nd half, and both sides started to field there tactical substitutions. Ex National Captain Jon Lee and current 7s rep Farhan Armran were outstanding for Bedok, but it was the impact subs of ex international Daniel Thiam that proved to be key for Saints RFC. Another try by Yau and a brilliant solo run by youngster Ruzani saw Saints RFC cap an historic night with their first win.
So with that two more weeks of exciting rugby ahead as Christmas time comes along.