It was a hot Sunday morning, and there seemed to be nothing out of the ordinary about the rugby training led by Team Singapore rugby player, Muhammad Zaki at the field… 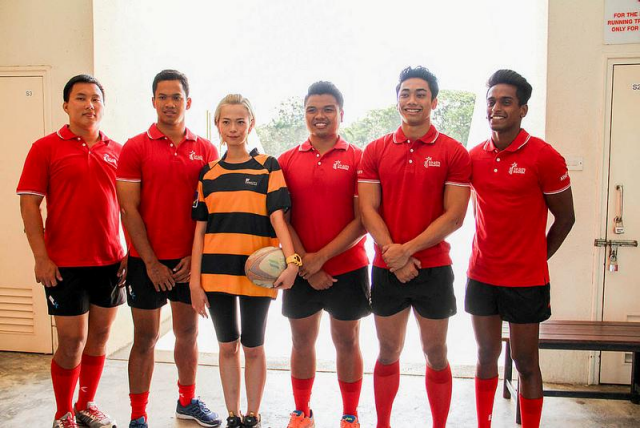 It was a hot Sunday morning, and there seemed to be nothing out of the ordinary about the rugby training led by Team Singapore rugby player, Muhammad Zaki at the field.
But take a closer look and the unexpected face of local celebrity Felicia Chin would become apparent under the searing sun, as she practised the passing drills.
The training was held due to Channel U’s latest drama serial Scrum! which is a rugby-themed show, and rugby players from the national set-up had lent their expertise to the casts of the show to help them learn more about the sport.
Training
“We started in the initial stages of the filming, where we taught them how to pass the ball and do all the basic stuff for rugby, that’s two months before the actual filming started,” Zaki shared.
Besides coaching the casts of the serial drama, the ruggers also provided insights on how certain scenes could be filmed or how the actors should behave on screen in order to achieve a sense of realism for the show.
Playing the role of a rugby coach in the drama, Chin admitted her experience and knowledge of rugby were limited prior to filming the drama.
For that, Chin was grateful towards the coaching team that comprised of Zaki, Ashraf and Gaspar for their guidance throughout filming.
“I feel the national players are definitely very important because they helped increase our knowledge of the game.” Chin shared, “At first they (the actors who were casted as students) were having a tough time because they can’t even throw the rugby ball right.
“Doing this drama was very tough for them because they had to do all the scenes themselves but at the end of the whole drama they actually learnt so much about the sport that they are able to play leisurely among themselves.”
Filming
But while the ruggers were dishing out advices, they too were being introduced to the experience of being in a film production process.
“Not everything on TV is perfect. It looks perfect but behind the scenes, a lot of hard work is put into it. Multiple takes will be done for even a 10 second scene,” said one of the coaches, Ashraf Nasser.
“It was kind of new, we have never been on the TV screen before so we did learn a few things along the way as well. “
“We spent half an hour to one hour just to film a 30 seconds scene so it is a bit of long day everyday with them,” Zaki added.
Since filming ended, Chin revealed that Scrum! has ignited her passion for rugby.
“For this show I actually watched a lot of live matches on TV, read up about rugby and I grew to love the adrenaline that I feel when I watch the matches,” the actress said.
“It made me change the way I feel. I have even more respect for the sport and I would definitely love to watch another (Rugby) Sevens match on TV as well.”
Support
With Scrum! set to air on Channel U soon, the ruggers voiced their hope that the show would have the same impact on people as it did on Chin, especially since rugby was one of the events in the Southeast Asia (SEA) Games 2015, which will be hosted by Singapore.
“As we know rugby isn’t really popular in Singapore ,” said Jay-Hykel Jailani, who plays as back 3 in the national set up.
“So hopefully with this show we will be able to bring up the sport and educate the viewers watching the show more about rugby.”
“SEA Games 2015 is coming up, and hopefully we can rally and bring in as much as supporters as we can.”
Scrums! will not be the only sport-oriented serial drama hitting the small screen, with Channel 8 set to premiere a football-themed drama, World at Your Feet, in May 2014.
“The type of sports featured in the dramas reflected its popularity in reality over the years that resonated well with the younger viewers,” said Mediacorp Vice President of Network Planning and Promotions Mr Paul Chan.
“For example, Martial Arts became a regular sport theme when Singapore performed exceptionally well in that segment during the SEA Games.
“World at Your Feet, starring Ha Yu, Tay Ping Hui, Elvin Ng, Jeanette Aw and many artistes premieres 14 May on Channel 8, is planned in conjunction with the upcoming World Cup fever whereas Scrum, starring Felicia Chin and many other young talents premieres 26 February on Channel U, is one sport that resonates with many youths.”