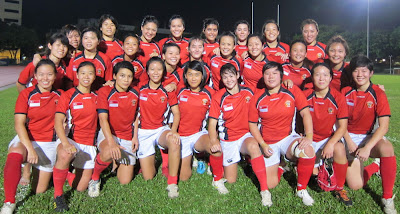 The Singapore National Women’s 15s Team for the Asian Women’s 15s 2012 Div II tournament to be hosted by the Philippine Rugby Football Union was announced this afternoon.

As Singapore National Women’s Head Coach, Danny Tauroa, will not be travelling with the team, forwards coach, Simon Etheredge and the Singapore SCNRA Women’s Team coach, Muhammed Zaki will be leading the team up to Manila.

Seeded first in the tournament, Singapore will meet fourth-seed Lao PDR on 14 June 2012 and will be gunning for a spot in the finals on 16 July 2012.  Second-seed Thailand will meet the Philippine Volcanoes on 14 June 2012.