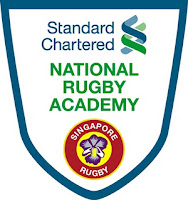 Vision:
“To be a prominent rugby playing nation in Asia”
Mission:
“To create a rugby performance pathway for young Singapore players which leads to National representation”
Objectives:
“To provide elite level coaching for selected players based on long term player development principles”

The SCNRA will be the first of its kind in Asia to provide elite coaching and player development tailored according to age, physical development and the rigours of the education system.

“The Standard Chartered National Rugby Academy aims to educate players in all aspects of elite participation, from strength and conditioning to nutrition, in a professional structure while taking into account the other considerations Singaporean sportsmen have, such as studies and National Service,“ said Low Teo Ping, President, Singapore Rugby Union. “Youth is the future of sport, and everyone recognises it, and the Standard Chartered National Rugby Academy will provide the nucleus to make Singapore to be a consistently dominant rugby force in South East Asia and competitive in Asia. We would like to go on record in thanking Standard Chartered Bank not only for their support in this exciting new initiative but also for their continued support of our youth programmes.”

“Standard Chartered Bank has been a proud partner in supporting youth rugby in Singapore since 1997, and believes that the ethos of the game – leadership, team spirit, courage, sportsmanship, and friendship builds strong character and helps young people succeed in life,” said Lim Cheng Teck, Chief Executive of Standard Chartered Bank, Singapore. “We are confident that the Standard Chartered National Rugby Academy, will take the sport to new heights and help build up a pipeline of talent for both the local Rugby scene and for Singapore.”

Standard Chartered Bank will also renew its sponsorship of youth rugby development in schools for a 3 year period, continuing the support it has given since 1997.