Singapore Rugby Union President, Mr Low Teo Ping has been awarded The Public Service Star Medal in the 2011 National Day Awards, for his contribution to sports over the years. 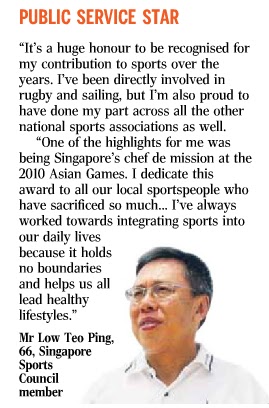 The Public Service Star was instituted in 1963.

The Public Service Star may be awarded to any person who has rendered valuable public service to the people of Singapore; or who has distinguished himself in the field of arts and letters, sports, the sciences, business, the professions and the labour movement.

The Medal consists of 2 concentric rings having, on the obverse side, a five-pointed star with star-burst design. In the centre is embossed a circular shield bearing a crescent and 5 stars. At the bottom half of the outer ring is a scroll bearing the inscription “BINTANG BAKTI MASYARAKAT”. The inner ring is embossed with a laurel wreath.

The reverse side of the Medal bears the State Arms. The Medal is to be worn on the left side of the outer garment suspended by a ribbon. The ribbon is grey with a white centre stripe flanked immediately on each side by a red stripe, a thin white stripe, another red stripe and finally, a thin white stripe, in that order. (Source link: National Day Awards >> Information on Medals)