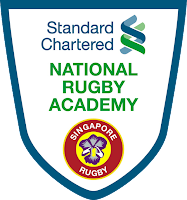 On Sunday 13th February the Standard Chartered Singapore National Rugby Academy held the National U14 trials at Republic Polytechnic which had already been rescheduled from mid January due to bad weather. Over 60 players arrived at the trial which was held in glorious sunshine and sweltering temperatures for the players to work extremely hard attempting to gain a place in the Academy system and into the bracket age group U13-U15.

The day was run by fulltime Singapore Rugby Union staff along with Singapore National team players, Desmond Wee, Sidney Kumar, Sophie Gollifer, and National captain Jonathan Lee. This gave all players something to aspire too and were given interaction with all national players throughout the afternoon.

All 60 players were split in 5 teams with a skills session to start with focusing on core skills of the game and then progressing onto full contact conditioned games. After the end of the sessions the selectors met and came up with 4 Gold Group players, 7 Silver Group player, and 4 Bronze Group players. All these players will now be integrated with the already formed U13 group and be invited to both rugby skills and strength and conditioning sessions.

Singapore Rugby will be running a further U14 trial to select a 25 man squad to represent the country and play Hong Kong in mid April when they tour Singapore.

“It was extremely heartening to see the wealth of talent Singapore has at this level. It is imperative that these boys know the Union has recognised their talent and willing to help nurture them into aspiring rugby players.”

Singapore Rugby would like to thank Republic Polytechnic for providing the facility.

For further details regarding Player Pathways and the Academy please contact Harry Orgee – harryorgee@sru.org.sg or 92779205

THE FIRST DAY OF THE SCC7s STARTS OFF WITH A BANG!