[Hong Kong, 19 January 2011]: HSBC and Asian Rugby Football Union (ARFU) today announced the continuation of their partnership in support of the HSBC Asian 5 Nations (HSBC A5N), Asia’s premier fifteen aside rugby competition. HSBC and ARFU also today announced the inception of a new rugby property, the HSBC Asian Sevens Series. Both sponsorships will run for the next three years from 2011 – 2013.

China 15s and 7s player and member of the China 7s coaching team Zhang Zhiqang was also on hand to represent nations participating in the HSBC Asian Sevens Series.

Speaking on today’s double announcement, Mark McCombe, CEO of HSBC Hong Kong said, “Today is another important day for HSBC as we cement our commitment to developing rugby in Asia through both the HSBC Asian 5 Nations and the HSBC Asian Sevens Series. The HSBC Asian 5 Nations has grown massively since its inception and is increasing in popularity around the region. By investing in the new HSBC Asian Sevens Series, in addition to the HSBC Sevens World Series, we aim to encourage more people to become involved with rugby union through the shortened form of the game in the build up to the 2016 Olympic Games.”

Alongside the HSBC A5N, the HSBC Asian Sevens will extend ARFU’s international rugby footprint from April through November each season. The 2011 HSBC A5N Top 5 will again be held on consecutive weekends from 23 April to 21 May. Although identified by the elite Top 5 competition, HSBC A5N offers international competition or development support for all eligible ARFU unions. Outside of the Top 5, the tournament features five divisions, (up from four in 2010), offering test match rugby for 25 ARFU teams this season.

The HSBC Asian Sevens Series consists of four events in 2011, with two ranking events, the Shanghai and Borneo Sevens, staged in September 2011. Two other events will be held in Thailand and India next year. The ARFU international window for sevens competition runs from September through November. The rankings will be used to determine eligible spots for invitations to HSBC Sevens World Series tournaments including the Hong Kong Sevens, as well as potentially serving as qualifiers for multi-sport competitions such as the Asian and Olympic Games.

“On behalf of ARFU, I would like to thank HSBC for their continued support. The HSBC Asian 5 Nations has been vital to the development and expansion of rugby in Asia at both the elite and grassroots level and we are very excited to renew our association. The advent of the new HSBC Asian Sevens Series promises to extend this remarkable growth even further. We have made tremendous strides in our sport since 2008 and we look forward to what the next three years will bring for Asian rugby,” said Trevor Gregory, Vice President of ARFU.

One constant for the coming years will be the commitment by both HSBC and ARFU to introducing rugby to new audiences through a Coaching Tour. This concept, first launched last year in conjunction with the HSBC Penguins International Coaching Academy, offered youth rugby clinics for over 3,000 youth across 10 countries in 2010. HSBC and ARFU are committed to growing this programme in the year ahead.

Giles Morgan, Group Head of Sponsorship for HSBC Holdings, explained the reason the bank continues to invest in rugby. “Quite simply, rugby union works for HSBC in terms of enabling HSBC to communicate directly with so many target customers in key regions around the world. Rugby union shares many of the same values as HSBC as the world’s local bank – bringing together people from different cultures and communities with a shared passion, and it has proved to be a successful fit for our business.

“At the heart of every HSBC sponsorship is a commitment to the local community and the HSBC Asian 5 Nations in particular has a major community programme integrated with the sponsorship. To ensure a legacy, as well as coaching children, adults involved in this year’s coaching tour will be trained to IRB Level One enabling them to continue teaching youngsters to play the game in future years. It is the biggest investment in the growth of the sport of its kind in Asia.”

HSBC ambassador and Coach of Japan, John Kirwan, will join part of the coaching tour and is looking forward to engaging more audiences. He said, “As a professional coach and a former player I am fortunate to have helped coached youngsters around the world, but I am genuinely excited about being part of the coaching tour later this year. To travel to countries where rugby is only just emerging as a sport, but that in the long term could be competing in the Asian 5 Nations or even the Olympic Games is a fantastic opportunity and I can’t wait to inspire people of all ages and all cultures to pick up a rugby ball and run, but most importantly to have fun.”

About HSBC:
The Hongkong and Shanghai Banking Corporation Limited is the founding and a principal member of the HSBC Group which, with around 8,000 properties in 87 countries and territories and assets of US$2,418 billion at 30 June 2010, is one of the world’s largest banking and financial services organisations. 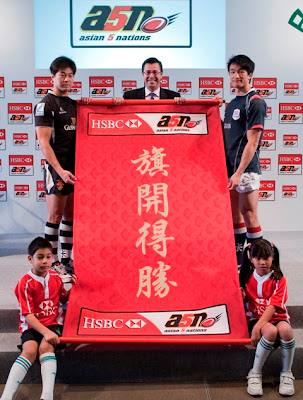 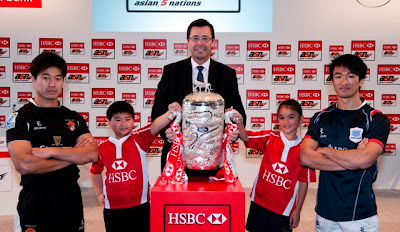 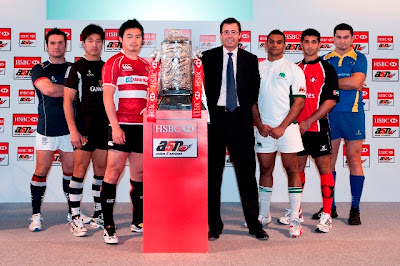 Photo 3 – To celebrate the renewal of HSBC’s sponsorship of the HSBC Asian 5 Nations and the launch of the new HSBC Asian Sevens Series, Mark McCombe, CEO of HSBC Hong Kong (fourth from right) is joined by international rugby players from China (second from left) and each of the Top 5 countries competing in the 2011 HSBC Asian 5 Nations, namely Hong Kong, Japan, Sri Lanka, the UAE and Kazakhstan. 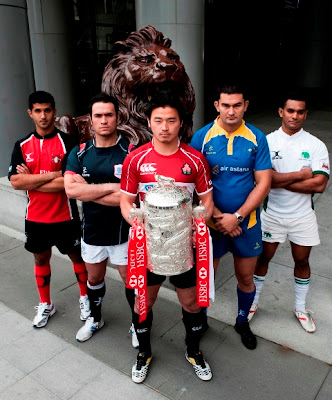 Photo 4 – International rugby players from each of the Top 5 countries competing in the 2011 HSBC Asian 5 Nations including UAE, Hong Kong, Japan, Kazakhstan and Sri Lanka (Left to Right), attend the launch of this year’s HSBC Asian 5 Nations and the announcement of the new HSBC Asian Sevens Series at the HSBC Main Building in Hong Kong. 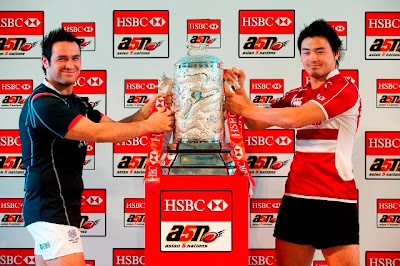 Photo 5 – (Left to Right) Simon Leung Ho Yam of Hong Kong and Ayumu Goromaru of Japan, tussle over the HSBC Asian 5 Nations trophy at today’s announcement that HSBC has committed to a further three-year sponsorship of the tournament. Japan is the defending champions.

CONTACTS:
For information on:
ARFU and the HSBC A5N and HSBC Asian Sevens, contact Sean Moore at sean.moore@elitestep.com or on +852 9095 8889; Chinese language enquiries to Andy Yeung at andy.yeung@elitestep.com.

HSBC’s support to the HSBC A5N and HSBC Asian Sevens Series, contact Ophelia Quach at opheliaquach@hsbc.com.hk or on +852 2822 3420.