SINGAPORE, 7 NOVEMBER 2010 – The Singapore Cricket Club International Rugby 7s came to a thrilling conclusion on the Padang, with HSBC Penguins lifting the Ablitt Cup after defeating SA Vipers 19-14. The HSBC Penguins team was in imperious form throughout the tournament and was deserved winners of the 63rd SCC 7s. Thousands of fans returned for the third day of Singapore’s oldest sports tournament and were treated to a feast of world-class rugby. In other finals, Sunnybank lifted the Plate, beating NS Wanderers 15-10, while Sri Lanka SLRFU won the Bowl, beating Tamariva 19-12 in the final.

Peter Hutton said: “Tonight’s Cup final was a fitting conclusion to a wonderful weekend of rugby. For the past three days, some of the world’s best players have exhibited their talents on the Padang. It is not often that we get to see such talented sportspeople perform in Singapore and we are proud to have entertained thousands of local fans over the course of the tournament. We are already looking forward to next year – it will be tough to stage a better quality competition, but we are committed to improving every year and we are already getting enquiries from other world-class teams.”

HSBC Penguins surprised fans taking the tournament with incredible execution and delivery stealing all glory from the Vipers. The final of the Ablitt Cup was a tremendous match, with SA Vipers and the HSBC Penguins serving up an exhilarating display of rugby. Scores at full time were equalized with two tries from SA Viper’s Bernado Botha and HSBC Penguin’s Nalu Tuigamala and David Raikuna. Ultimately the Penguins came out on top with Raikuna scoring the winning try with the final score being 19-14 after extra time. Both teams had been in outstanding form earlier in the day, securing their passage to the final with victories over Cottesloe, Davetalevu and Borneo Eagles, and East Arnhem Rugby, Ponsoby and Horowhenua-Kapiti respectively.

The SCC 7s is staged annually at the purpose built SCC 7s Padang Stadium, which is capable of holding 7,000 fans. The 2010 tournament was the 63rd edition of the tournament, and featured the first ever SCC Women’s International 7s, in which Singapore finished runners-up against Japan yesterday, as well as the first ever National Schools and Colleges Rugby 7s Championship. Anglo Chinese School Independent lifted the U-16 cup, while Tanglin Junior School came out on top in the U-19 competition. The finals were also televised for the very first time on StarHub TV Channel 201, SuperSports Arena. 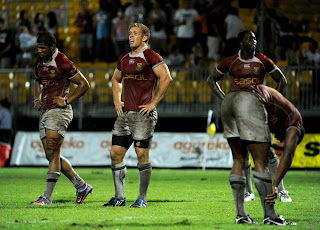 Kyle Brown looks in disappointment as final whistle is blown