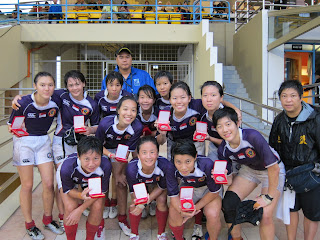 With the rain pouring down and pitch conditions best described as swampy, Singapore took on The Cook Islands in the Plate finals of the Asian Women’s Pacific 7s 2010 held in conjunction with the IRB Sevens Series and the Borneo 7s in Kota Kinabalu.

It was the Cook Islands that put in the first score using their size and close quarter support to put the Singaporeans on the backfoot. With low visibility and slippery conditions, Singapore defended their hearts out and held the game 5-0 at the half.

The republic struck back in the second half by stretching the Cook Islands defence and Samantha Teo raced home to equalize. Both sides had further attacking opportunities but neither was able to seal the win before full time taking the game into extra time.

The Cook Islands played to their strengths at sudden death with a tight game, hitting the Singapore defence with their larger players, eventually winning the Plate Final.

Singapore emerged the Plate Runners Up and ranked 4th in the tournament. Kazakhstan beat Papua New Guinea 22-15 in an equally gritty display to be crowned Cup Champions of the Asian Pacific Women’s 7s 2010.