SINGAPORE, 6 NOVEMBER 2010 – The Singapore Women’s National team warmed up for the Asian Games by finishing runners-up in the first ever SCC Women’s International 7s competition, following an exciting final against Japan. The national team were roared on by a huge crowd at the SCC 7s Padang Stadium, with fans also enjoying the culmination of the pool stages of the main competition – the men’s Ablitt Cup. Pre-tournament favourites South Africa Vipers, HSBC Penguins, Ponsonby, Davetalevu and Japan Samurai progressed to the Cup tournament after winning their groups.

Peter Hutton, Chairman, SCC Rugby 7s Organising Committee, said: “We have been treated to another wonderful day of rugby. We are extremely proud of the National Women’s team and are delighted that they have performed so well. Rugby 7s is a sport which appeals to men, women and children and we hope the Singapore team will improve their standing at next year’s tournament. Tomorrow, the knock-out stages of the Ablitt Cup begin and we expect the intensity and quality to reach a new level – fans can expect to see some incredible rugby tomorrow.”

Singapore progressed to the final of the Women’s competition by defeating Hong Kong in the semi-final 17-12. Japan, meanwhile, overcame India, 36-0. The final was an exciting spectacle of running rugby, which kept the large crowd on the edge of their seats. In the end, Japan beat Singapore after a tense and exciting game with a score of 14-0.

Eunice Tay, Captain of the Singapore Women’s team said, “The SCC 7s tournament has been a key part of our preparation and conditioning for the Asian Games and has been our final opportunity to play against some of our biggest competitors. We are confident as a team and hope to make Singapore proud at the Asian Games. At the end of the day, our biggest competitors are ourselves!”

Following the Women’s final, fans were treated to world-class action in the Ablitt Cup matches, with games stretching well into the night. South Africa Vipers continued their good form from day one, recording victories over East Arnhem Rugby (36-7), and Impala (19-0). Davetalevu also maintained their 100% record in the pool stage, cruising to a 62-0 victory over the Flying Kukris, before defeating Hong Kong Dragons 33-0. Japan Samurai improved on a shaky start on day one to defeat countrymen Tamariva 14-0 and Sunnybank 19-14.

In Pool A, HSBC Penguins and Borneo Eagles overcame Almaty and Cottesloe (40-5 and 21-19 respectively) before a thunderous clash eventually saw Penguins finish top of the group with a 29-0 win. In Pool B, Ponsonby overcame the challenge of the NS Wanderers 43-7 in another thrilling game, with both teams progressing to the Cup. Horowhenua-Kapiti finished top of the group after beating Cobra 27-19.
The 2010 SCC 7s culminates tomorrow at the purpose built festival arena at the Padang, capable of holding over 7,000 fans. Tickets are on sale at or the gate and are priced at $50 for an adult and $25 for under-18s. 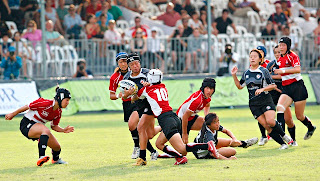 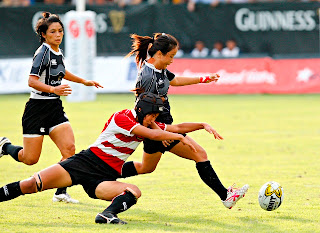